Over 700.000 have attended this Catalan National Day demonstration in Barcelona, to defend Catalonia’s independence and denounce repressive practices, judicial persecution and illegal espionage on the Catalan independence movement by the Spanish state.

The Catalan National Day rally has  once more validated the support of civil society for the independence. This year’s 11th of September has brought together over 700.000 participants in the march towards independence with a very clear slogan: “We are back to win. Independence!”

In the middle of a very complicated world context, with Ukraine suffering Russia’s military aggression and with the worsening of the energy crisis, people have still come together to rally for democracy and fundamental rights. Not only from Catalonia and the Spanish state but from around the world. Catalans have marched together with over a hundred foreign representatives from several countries and stateless nations, including Kurds, Riffians, Uighurs, Saharawi, Kabyle, and others. European representatives from Flanders, the Basque Country, Galicia, Castile, Hungary, Sardinia, Portugal and Belarus have also joined in solidarity with Catalonia’s struggle.

The political event started once the head of the demonstration reached the stage at Estació de França railway station. Jordi Pesarrodona, the Catalan National Assembly vice-president opened the political rally stressing that “We must say loud and clear that enough is enough. What about the more than four thousand people who are fighting for national rights and who are suffering reprisals?” Omnium Cultural president Xavier Antich stated that “neither repression nor frustration have prevented this country from mobilising”, and Jordi Gaseni, the president of the Association of Municipalities for Independence remarked that “despite the difficulties, we are strong, determined and convinced to make the independence of our country possible”.

The president of the Catalan National Assembly Dolors Feliu closed the event stressing that Catalans are a peaceful people who want to achieve independence by democratic means. She recalled Catalonia’s referendum on October 1st, 2017: “on that day, despite the repression, we felt that we were victorious. We learned the power of the vote at the ballot box. Let’s use it, let’s use democracy”.

Dolors Feliu also denounced the Catalangate political espionage scandal and warned the European institutions that they need to take action: “If Europe wants to be a world leader in democracy and be able to lecture others, it cannot tolerate this massive violation of the fundamental rights of its people”, she said.

The Catalan National Assembly has been organising peaceful and democratic rallies and protests to demand Catalonia’s independence every September 11th since 2012. Thanks to social mobilisation, these events have taken place every single year, even during the COVID19 pandemic when it was adapted as a non-centralised event to comply with health recommendations. And it’s been proven again, that the struggle for independence is still alive on the streets, so independence must return to the centre of Catalan politics.

Throughout the weekend, Catalans all over the world have celebrated Catalonia’s National Day in their respective countries. Assemblea’s foreign branches have held events in Belgium, the Netherlands, England, France, the United States and Mexico between the 10th and 11th of September. 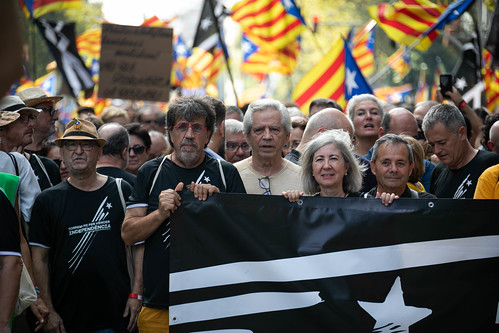