The oldest Parliament in the world

The Generalitat of Catalonia

The Generalitat is a complex entity made up of the Presidency of the Generalitat, the Government and the other institutions established in the Statute of Autonomy (the Council for Statutory Guarantees, the Ombudsman, the Public Audit Office and the Catalan Broadcasting Authority). Municipal councils, “consells comarcals” (county councils) and other local-government bodies determined by law are also included within the institutional system of the Generalitat. These are the bodies according to which the Catalan government is organized on a local and territorial level, although each body has its own respective autonomy of action.

Catalonia exercises its self-government in those areas specified in the Statute of Autonomy. Legislative power, regulatory power and the executive functions correspond fully to the Generalitat for matters in which the Generalitat’s power is defined as “exclusive”. For other matters, where its power is defined as “shared”, Catalonia legislates within the framework of the basic conditions established by the Spanish State. Finally, there are other issues in which it simply executes the legislation deriving from the central State.

The Parliament of Catalonia 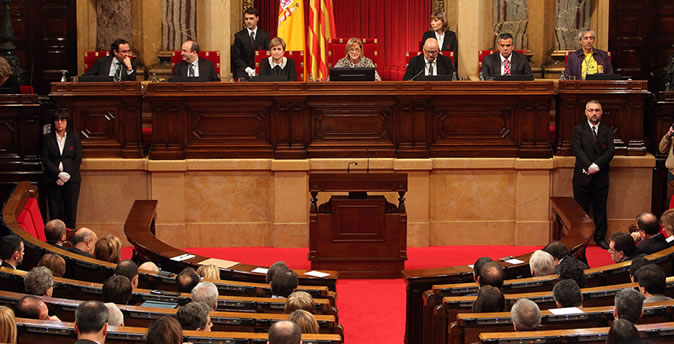 The Parliament represents the people of Catalonia. As a directly and democratically elected body, the Parliament has supreme power and is the Generalitat’s most important institution – all other public institutions stem from it. The Parliament of Catalonia consists of a single chamber or house, and is independent and inviolable.

The Parliament of Catalonia has a single chamber of 135 members. As the institution which represents the people of Catalonia, it is a central part of the “Generalitat” (the Catalan system of government). The parliamentary tradition in Catalonia dates from the Middle Ages. Abolished under the Franco dictatorship for 40 years, the Parliament was eventually restored in 1980. There have been ten regional elections since then.

The configuration of political parties in the Catalan Parliament is very different from that in the Spanish Parliament. There are a larger number of parties with a significant parliamentary representation. In addition to the usual left-right spectrum of opinions, all parties also position themselves on the spectrum of opinions regarding the relationship between Catalonia and Spain. 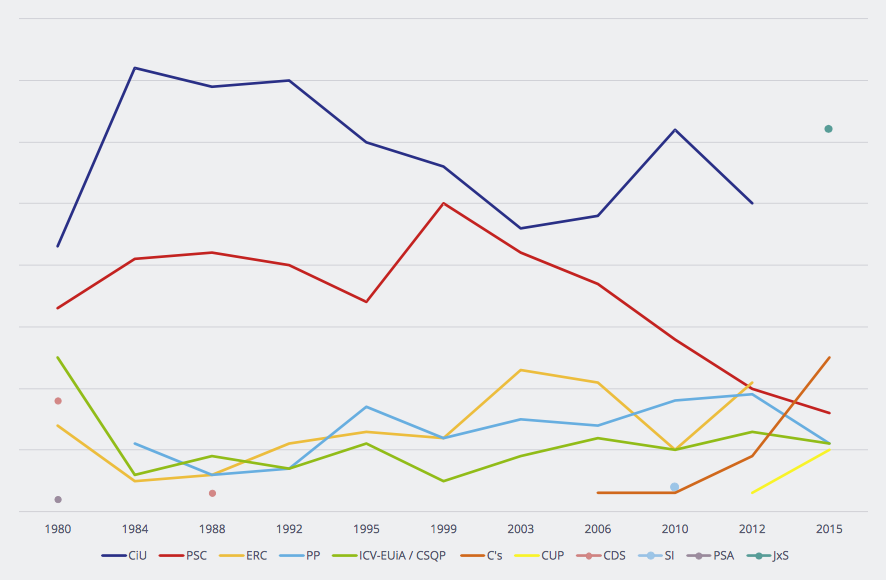 Junts per Catalunya (JxCat) has 34 MPs and at this moment forms a minority government thanks to a Stability Pact with CUP and ERC. It is a political formation that emerged in 2017 especially for the elections of December 21 after the dissolution of the Junts pel Sí coalition, which they also had with ERC, with Carles Puigdemont as party leader from exile.

Esquerra Republicana de Catalunya (ERC) has 32 MPs. It was founded in 1931 in Barcelona and it held an important role during the Second Republic. Its first president was Joaquim Llorens Abelló, but Francesc Macià, his successor who spent a lot of time in exile, and Lluís Companys, shot by Franco’s troops, were the most emblematic presidents to date. Currently ERC President Oriol Junqueras is in preventive detention for the organization of the referendum of October 1, 2017. ERC works for the independence and republicanism of Catalonia.

Ciutadans – Ciutadanos (C’s) has 36 MPs. It first entered in Parliament in 2006. It campaigns in favour of Spanish unity, seeking to attract votes from both left and right-wing voters and is against the celebration of a referendum.

The Partit dels Socialistes de Catalunya (PSC) has 17 MPs. IT is federated with the Spanish Socialist Party (PSOE). It promotes a constitutional reform to make Spain a federal country. It is currently the ruling party in Spain after imposing a censorship motion on the previous government of the PP leadered by Mariano Rajoy.

Catalunya en Comú – Podem has 8 MPs. It is the subsidiary party of Podemos in Catalonia, which does not favor either for or against the independence of Catalonia, but it aims to celebrate an agreed referendum. It denies the existence of political prisoners in Spain.

The Partido Popular (PP) has 4 MPs. It is a conservative, right-wing party of rights in favor of the unity of Spain. It is against the celebration of a referendum to decide on the future status of Catalonia.

Candidatura d’Unitat Popular – Alternativa d’Esquerres (CUP) has 4 MPs. It first entered in Parliament in 2012. It is an alternative left-wing party, and is in favor and struggling for independence.

President Quim Torra and the Government of Catalonia

The executive branch of the Government of Catalonia is composed by thirteen ministers in charge of economy and treasury, presidency, foreign affairs, public administrations, education, health, home affairs, territory and sustainability, culture, justice, labour and social affairs, business and knowledge, and agriculture.