The Media Pluralism Monitor 2020 report calls on the Spanish authorities to repeal or modify laws that restrict freedom of expression and information, to guarantee the protection and safety of journalists, and the need for greater recognition of minorities.

The Centre for Media Pluralism and Media Freedom alerts  to a “disturbing situation” concerning freedom of speech and protection of the right to information in Spain, following the publication of  the Media Pluralism Monitor 2020 on July 23rd. During the presentation of the report, the Vice-President of the Commission for Values and Transparency, Vera Jourova, stated that “We need to better protect journalists and to increase transparency and fairness in the online world”  and together with the Commissioner for the Internal Market, Thierry Breton, called on the member states to help reverse the trend of eroding press freedom and free speech.

This edition  highlights  the deterioration of the situation in Spain since the 2017 report. The institution describes  the attempts of the Spanish authorities to implement legislation to ensure media pluralism as “often weak and ineffective”, and denounces  the need to abolish or reform the Penal Code and the Organic Law 4/2015 on the Protection of Public Security (A.K.A. the Gag Law), joining the call of many International NGOs such as Amnesty International, Human Rights Watch or Reporters Without Borders, International institutions like the Council of Europe, as well as representations of several countries at the UN Universal Periodic Review of Spain in early 2020.

According to the report, offences against honour and religious sentiment “are a risk of criminalization of information activities linked to the effective exercise of freedom of expression and information. As a consequence, journalists and media have been reported to the courts for disrespecting the authority, glorification of terrorism, and outrage to the Spanish flag”. In that sense, two countries scored an overall high risk for Protection of the right to information: Turkey and Spain, where, “The Spanish public administration obstructs or delays access to the information requested, and there are no rules to protect whistle-blowers”. 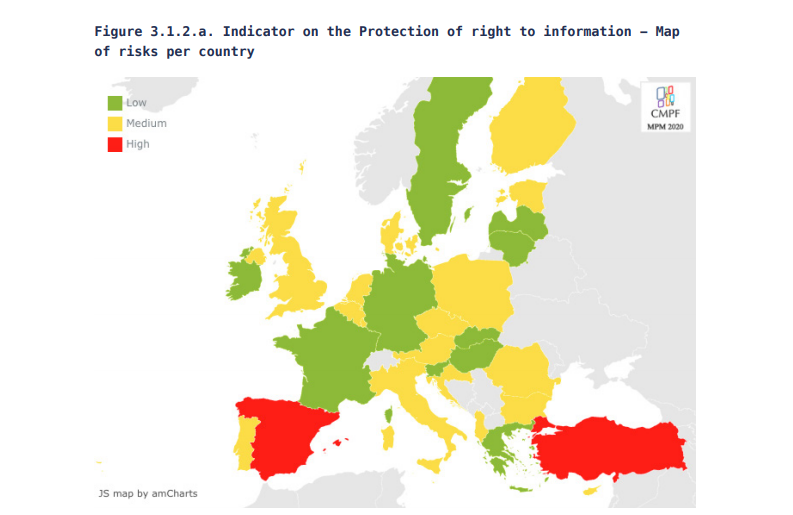 The study alerts to the rising police violence against journalists, especially during the 2019 protests in Catalonia against the prison sentences for Catalan civic and political leaders in relation to the independence referendum of 2017, and indicates  that “the arbitrariness of many police actions suggests that these attacks are aimed at intimidating journalists, intending to force them to stay away” and hide abuses police officers might commit. Moreover, the polarization provoked by the rise of  right-wing VOX,  which has  denied journalists of several media access to press conferences and other media  events, has radicalized the political sphere, preventing consensus for important legislative reforms.

Concerning the presence of Catalan and other minority languages in the media, the lack of representation in public, and especially in private channels, is a violation of OSCE recommendations.

The study concludes  with  a call on the Spanish authorities to repeal or modify laws that restrict freedom of expression and information, to which they add the Royal Digital Decree  which allows the blocking of digital networks and contents without judicial intervention. Moreover, they require they guarantee the protection and safety of journalists, and the need for greater recognition of minorities, as well as enhancing the use of  minority languages in public media.

Read the detailed report on Spain