A dozen foreign assemblies of Assemblea –the Catalan National Assembly– all over the globe will hold several political and cultural events, as well as social gatherings, on the occasion of La Diada –Catalan National Day— of September 11th.

With La Diada –Catalan National Day— approaching, several foreign assemblies of the Catalan National Assembly have already announced the organization of several events on the occasion of the most important day for the Catalan pro-independence movement.

The foreign assemblies in England, Ecuador, Belgium, France (Paris and Nice), Mexico, the Netherlands, Luxembourg, Ireland and the United States have announced their activities and events, to take place between the 10th and 11th of September. 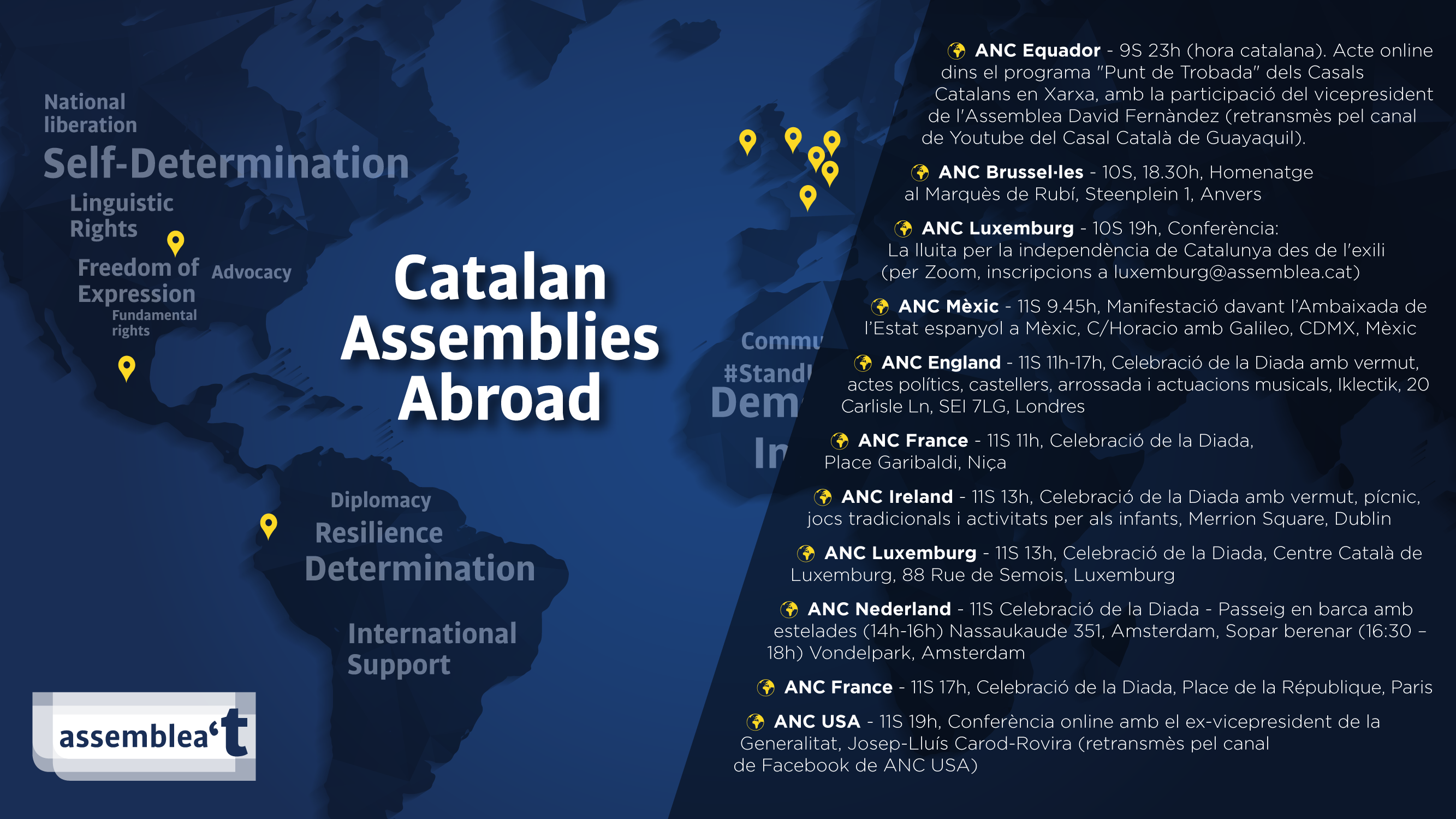 The representation of the Catalan National Assembly in Belgium is co-organizing an homage to the figure of the Marquis of Rubí –a key figure of the Catalan exile diaspora after the 1714 defeat of Barcelona— with the Catalan President in exile and MEP Carles Puigdemont, and Assemblea Vice President David Fernández. Mr. Fernández will also be interviewed at a digital event coordinated by ANC Ecuador, concerning the details of this year’s demonstration.

The Catalan National Assembly branch in England is organizing a reception with the performance of traditional Catalan dances and Castells (human towers), as well as a debate on the Scottish independence referendum with the participation of Chris Bambery, Scottish writer and political activist, among other events. On the 11th of September the US branch will hold an online conference on current challenges of the Catalan pro-independence movement with former VP of the Catalan government Josep-Lluís Carod Rovira.

The branch in Mexico will hold a demonstration in front of the Spanish embassy in Mexico City, while Assemblea France is organizing mobilizations both in Paris and Nice, to denounce the continuing Spanish repression against the Catalan pro-independence movement. Assemblea Luxembourg will hold a digital event on the context and current situation of the Catalan representatives in exile, as well as co-organizing an event to celebrate the occasion.

Finally, Assemblea Ireland will be organizing a gathering in Merrion Square, Dublin; and Assemblea Netherlands will be holding several events in Amsterdam to celebrate La Diada. For more information on the events, check this link (Events int.assemblea.cat).

International Meeting Point for the Diada in Barcelona

This year’s 11th of September Catalan National Day protest will be centered in the city of Barcelona, with the goal of mobilizing the citizenry and the popular front to place pressure on the institutions and to convey that independence won’t be won without fighting. Starting at 17:14h, the mobilization will consist of a march from Plaça Urquinaona to Parc de la Ciutadella, where the Parliament of Catalonia is located: it will advance down Via Laietana, turn the corner at Avinguda Isabel II and continue along Avinguda Marquès de l’Argentera to Estació de França.

The #CatalanWeek to take place in October

As is traditional, the Foreign Assemblies of the Catalan National Assembly organize several events in the run-up to the Catalan National Day on the 11th of September, but on this occasion, this year’s edition of the #CatalanWeek will take place in the first week of October, in the context of the 4th anniversary of the 1st of October 2017 Catalan independence referendum.

Organized for the first time in 2016, the #CatalanWeek focuses on fostering Catalonia’s pro-independence cause abroad, and in the current situation the country is facing, also denounces Spain’s political repression against the people of Catalonia.