Kickstarted by the foreign branches of the Catalan National Assembly, the #CatalanWeek will last from October 5rd to the 14th, and will include off-line as well as on-line events, in the context of the 4th anniversary of the Oct 1st, 2017 Catalan Independence referendum.

Organized for the first time in 2016, the #CatalanWeek aims at fostering Catalonia’s pro-independence cause abroad, and at the moment the country is currently facing, mobilizing the Catalan diaspora to denounce and raise awareness on Spain’s political repression and human rights violations against the people of Catalonia.

In this sense, Assemblea’s foreign branches in countries like Mexico, Belgium, the Netherlands, Luxembourg, the Baltic states, Germany, the Basque Country and Madrid as well as Assemblea’s International Committee, will organize over 12 events spread over two weeks, from October 5th to the 14th. 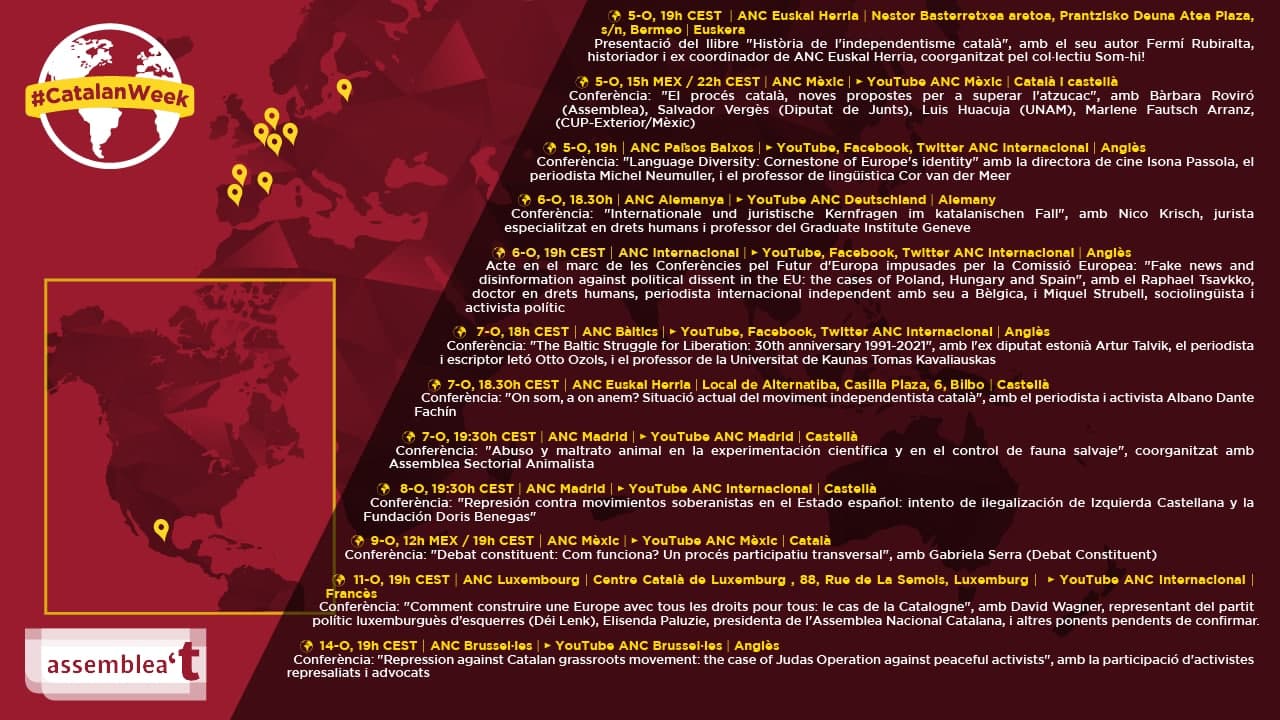 The foreign assemblies of the Netherlands, the Basque Country and Mexico will kickstart the events, the first focusing on minority languages and their role in Europe, with experts on the Catalan, Occitan and Frisian languages.  The Basque Country will co-organize, together with the ‘Som-hi” Catalan culture organization in the Basque Country, an on-site book presentation of a “History of the Catalan pro-independence movement” with author and former ANC Euskal Herria (Basque Country) coordinator Fermí Rubiralta. Finally, ANC Mexico will organize an on-line event on the current challenges of the Catalan pro-independence movement, with representatives of Catalan political parties and an expert on international relations and the European Union.

The following day, October 6th, ANC Germany is organizing a video conference on international and legal issues in the Catalan case, followed by the public debate“Fake news and disinformation against political dissent in the EU”, organized by Assemblea’s International Committee in the framework of Conference on the Future of Europe of the European Commission, with PhD in human rights and international journalist Raphael Tsavkko Garcia and Catalan sociolinguist and political activist Miquel Strubell.

On the 7th of October, it will be the turn of ANC Baltic States, who will organize a debate on the occasion of the 30th anniversary of the independence of the Baltic states, with former Estonian MP and former leader of the Estonian Free Party, Artur Talvik; Latvian journalist and writer specialized in the Catalan language and active participant  in the 2013 Catalan Way, Otto Ozols; and Tomas Kavaliauskas, Associate Professor at the University of Kaunas, Lithuania, specialized in national minorities.

The same day, ANC Euskal Herria will organize another event on the current situation of the Catalan pro-independence movement and its challenges, with former Member of the Catalan Parliament and activist Albano Dante Fachin; and ANC Madrid will organize a conference against experimentation on animals and animal abuse.

On the 8th of October, ANC Madrid will hold another event, this time on the attempts of the Spanish authorities’ repression against self-determination movements, including illegalizing minority political parties and blocking the creation of non-profit organisations, such as Izquierda Castellana and the Doris Benegas Foundation.

On the 9th of October, ANC Mexico will organize a second event, this time on the Debat Constituent, a movement looking to push the debate on Catalan independence forward with a more active role from the civil society.

The following week will see two more events. The first, on Monday 11th, on the impact of the Catalan case on the fundamental rights of all Europeans, organized by ANC Luxembourg, with the participation of the left-wing party DeÍ Lenk representative, David Wagner; Assemblea President, Elisenda Paluzie; and other speakers pending confirmation. Finally, ANC Brussels will close the Catalan Week on the 14th, with the on-line conference “Repression against Catalan grassroots movement: the case of Judas Operation against peaceful activists”, with the participation of persecuted activists and lawyers.

A key part of the organizational structure of the Catalan National Assembly, Assemblea’s foreign assemblies work at a grassroots level as organized Catalan diaspora with local organizations, NGOs and political representatives all over the world to inform about the political situation in Catalonia and its struggle for independence and encourage anyone interested in contributing and working  towards Catalan pro-independence cause from abroad to get in touch with them, to learn more or to take part in these or other events.