The Catalan National Assembly has co-hosted the release of the Unrepresented Nations and Peoples Organization’s (UNPO) report on the tools of repression that authoritarian states use against human rights defenders.

The Catalan National Assembly yesterday coorganized an event in New York to present the report ‘Tools of Repression: Spain and Global Trends in Silencing Self-determination Movements” elaborated by the UNPO and presented in cooperation with the Ralph Bunche Institute for International Studies at the Graduate Center of the City University of New York. The report highlights the influence and impact that the Spanish authorities’ repression of the Catalan pro-independence movements has had on other governments trying to silence activists of stateless nations around the world.

In that regard, Catalonia has seen a clear deterioration in human rights, especially after the repression inflicted by Spanish authorities during and after the October 1st independence referendum. Their attempt to quash Catalonia’s self-determination movement has weakened freedoms of press, speech, opinion, association, and assembly, the rights to liberty and security, and the right to a fair trial. The attempt to disqualify and criminalize Catalonia’s democratic struggle has led to arrests of politicians, journalists, public figures and community activists, including former Assemblea presidents.

This disproportionate response by Spain sets a dangerous precedent for human rights defenders worldwide, as it has provided undemocratic countries with a justification to implement similar repressive tools against self-determination movements, such as the Kurds, the Crimean Tatars and the Tibetans. “This report documents different ways repression was being placed upon UNPO members. We realized that when we see China, Russia, Iran, authoritarian states suppressing minorities, they were saying: Well, it’s just what Spain is doing to the Catalans”, UNPO’s General Secretary Ralph Bunche, has explained.

One of the speakers at the event, former Assemblea president and current UNPO vice-president Elisenda Paluzie denounced that “five years after Catalonia’s independence referendum, Spain continues criminalising the self-determination movement”, and other countries are following its example. Paluzie explained that “In 2021, the editor of the Chinese Communist Party’s newspaper Global Times threatened Taiwanese president Tsai Ing-Weng stating: ‘If you were a separatist leader in Spain’s Catalonia region, you would have been in prison now’”. 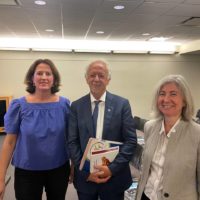 In the framework of the event, Assemblea president Dolors Feliu, and former Assemblea president and current UNPO vice-president Elisenda Paluzie, held a meeting with United Nations Special Rapporteur on Minority Issues Mr Fernand de Varennes, and updated him on human rights violations committed by Spain against the Catalan national minority, especially when it comes to the mass use of Pegasus spyware.

Throughout the week, Assemblea’s representatives are also meeting with state delegations to the UN, policymakers, and NGOs, both in New York and Washington. They will discuss the situation concerning Catalonia’s struggle for independence and Spain’s repressive actions, and discuss prospects of cooperation and ways to increase the visibility of the Catalan struggle in the United States.