This year’s mobilisation will once again be centralised in Barcelona: it will start in Avinguda del Paral·lel and end in Avinguda Marquès d’Argentera, opposite the Estació de França station, where the stage will be located. The organisation has chosen to make the announcement  in the Fossar de les Moreres because of its historical and symbolic value for independence and to reinforce the idea of the struggle without surrender.

This Tuesday morning, the Catalan National Assembly presented the route for this year’s Catalonia National Day, the Diada on 11 September, which will once again centre on Barcelona and will be a march. The presentation took place in the Fossar de les Moreres, which was a common graveyard for the fallen during the 1714 siege of Barcelona, and is now a monument in their homage.  This location reinforces the idea of struggle without surrender, in accordance with the slogan of this Diada: “Tornem-hi per Vèncer: Independència” (“We’re back to win! Independence!”).  The event was attended by the president of the Assembly, Dolors Feliu, the organisation’s mobilisation coordinator, Esther Güell, Montse Ortiz of Òmnium Cultural and Jordi Gaseni, president of the Association of Municipalities for Independence (AMI).

La Diada commemorates the fall of Barcelona on September 11, 1714, when Catalonia lost the governing institutions it had maintained since the Middle Ages. Soon after,  King Philip V of the Borbon dynasty subjected Catalonia to the laws of the Spanish central power, which entailed a great repression of  Catalan culture, language and tradition.

The demonstration will go from Avinguda del Paral·lel, along the Moll de la Fusta and Passeig d’Isabel II to Avinguda Marquès d’Argentera, ending in front of the Estació de França station, where the stage will be located. On this occasion, the international accreditation point will be in front of the entrance to the Maritime Museum, next to the Columbus Monument roundabout. 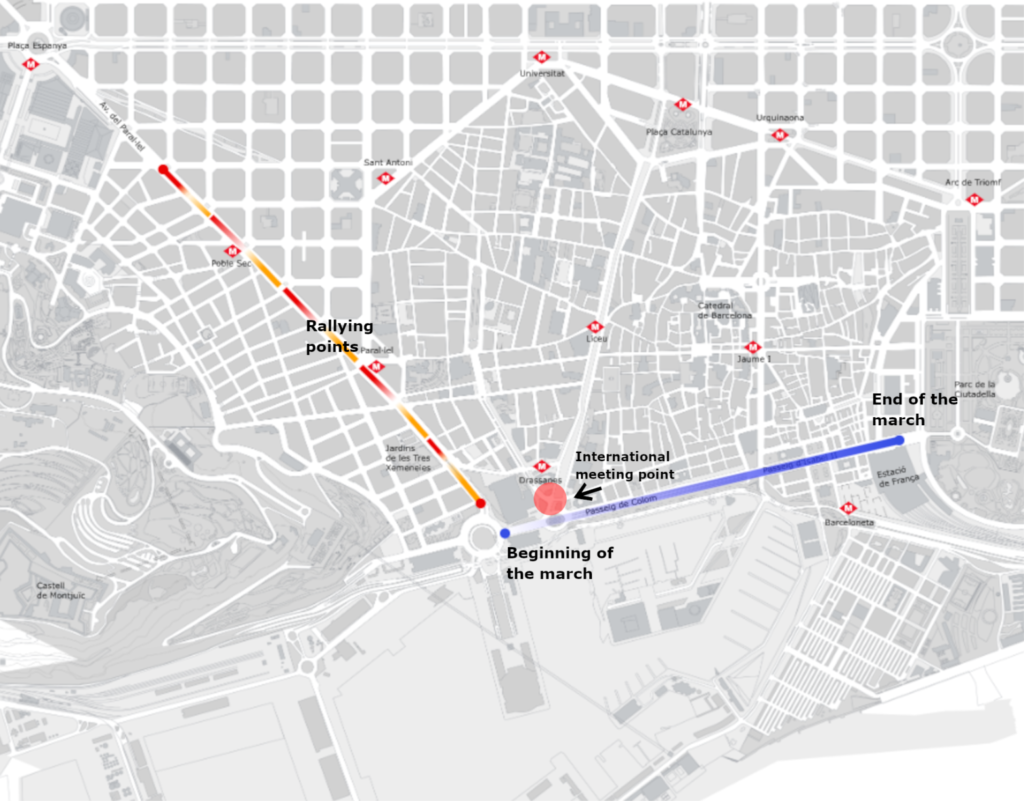 The Assembly’s mobilisation coordinator, Esther Güell, presented the route. “It will be a demonstration in movement, sober, without performances”. The president of the Assembly, Dolors Feliu, stressed that “The message this year is that we will push for independence. If the parties don’t do it, we will! This Diada will be the one that will start a new onslaught”.

The organisation  also presented the website of the Diada, where you can consult the route and the different information and concentration points, and buy  this Diada’s T-shirt and merchandise.

Montse Ortizof Òmnium Cultural declared that “We must make a new demonstration of  strength and capacity for mobilisation of civil society in Catalonia”, and that “The only way to exercise self-determination is by exercising all the fundamental rights that we have won”. For his part, the president of the AMI, Jordi Gaseni, insisted that “The Spanish state is very clear about where it can harm us: with demobilisation and division. That is why now, more than ever, we must make the effort to fill the streets of Barcelona”.

The Assembly recalls that independence is no longer at the centre of politics, and regrets the inaction of the parties,  which it no longer counts on or believes in. They abandoned the path towards independence despite having received a clear mandate with the 1st October independence referendum and with an independence majority having been voted  to the Catalan Parliament. That is why the organisation claims that the liberation of Catalonia will only be achieved with the strength of people.

As for this year’s 1st October, the organisation has called on the Territorial Assemblies to collect referendum ballot boxes to carry out symbolic acts in every town in the country, culminating in a central act in Barcelona, which we will provide details for at a later date.