Catalan is the language of Catalonia. It had evolved from the common Latin before the ninth century and belongs to the western branch of the Romance languages.

Where is Catalan spoken?

The linguistic domain extends over an area of more than 68,000 km2 in four different states: Andorra, Spain (in Catalonia, Valencia, the Balearic Islands and eastern Aragon), France (Département des Pyrénées Orientales) and Italy (in the city of Alghero in Sardinia).

How many people speak Catalan?

About 10 million people speak Catalan actively and about 12 million understand it. It is the 9th most spoken language in the European Union. 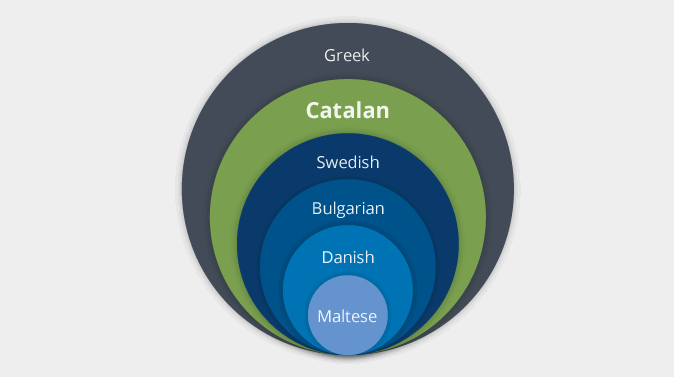 What is the status of Catalan elsewhere

Catalan is the only official language in the Principality of Andorra. It is also official alongside Spanish in the Valencia region (under the name of Valencian) and in the Balearic Islands. In the Catalan-speaking area of Aragon, there is no legal status for the Catalan language but some city councils and institutions do recognise it. In the French territories where Catalan is spoken, it has a merely symbolic official acceptance. In Alghero, Catalan is recognised in Sardinia’s Statute of Autonomy.

Is Catalan recognized by the EU?

Although the Catalan language is spoken by 10 million Europeans, it is not on the list of the 24 official languages of the EU.

Is Catalonia a multilingual society?

Catalonia is a proud and inclusive multicultural and multilingual society. More than 200 different languages are spoken on the streets of Catalonia, from Abron to Zapoteca. In its drive for multilingualism, the Catalan Government has recently rendered it necessary to demonstrate an intermediate level of English, French, German or Italian to get a university degree.